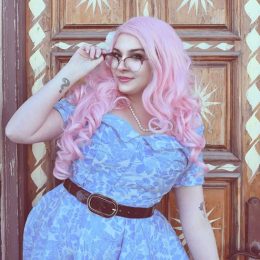 Lochlan O’Neil is a fashion and costume designer, cosplayer, and model located in Denver, Colorado. Lochlan fell in love with costume design and construction after she was exposed to such intricate costume design when she attended her first pop culture convention in 2012. Since then, she has been working tirelessly to learn all she can about the art form, and to continuously push her limits in terms of costume design possibilities. Since 2013, Lochlan has been working as a contract costumer, being hired by conventions all over North America to host workshops, emcee events, judge contests, and partake in meet and greets with fans. Lochlan also works as a freelance designer, helping both individuals and corporations bring their visions to life.